Behold, I Make All Things New 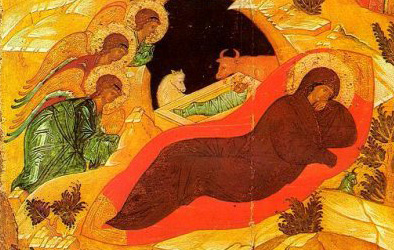 “It is done! I am the Alpha and the Omega, the Beginning and the end.” — from Revelation 21

One of the most poignant prayers Orthodox Christians pray is a morning prayer addressed to the Theotokos, the Mother of our Lord. As we pray, we confess our brokenness and our many sins. We then ask her, as a mother, to “renew me, who am grown old from senseless sins.”

G.K. Chesterton once wrote, speaking for all mankind, that “we have sinned and grown old, and our Father is younger than we are.” The time of preparation, prior to the Feasts of Nativity and Theophany, are times when we in the Church meditate on this reality: that we have grown old in our sins. We have allowed the beautiful image of God in us to be tarnished. We have allowed the splendid robes of righteousness He has offered us to be tattered and worn. We, many of whom are so young, have rather “grown old from senseless sins.”

As has been said in scripture, “There is nothing new under the sun.” The prophets of old bear witness that senseless sins—the rags of our mortality—have brought on decay. The walls of Zion are crumbling, the prophets announce. Joy has been carried away. The vitality of youth has been sapped. But with the prophets’ brazen exposé of the reality of sin and decay comes their equally bold proclamation of the coming of salvation.

The twin feasts of the Lord’s Nativity (Christmas) and His Theophany (Epiphany), which follows twelve days after Nativity, both address the tragedy of our “growing old in senseless sins.” In the fasting season leading up to Nativity, we commemorate the prophets who spoke of this decay. We recount Christ’s own broken human geneaology—from Adam through David (by Bathsheba, no less!), through the most wicked of kings. Dark stories abound in the Lord’s line according to the flesh. Christ’s history is—like our own—a rather sordid affair. But now, in the glorious commemoration of these two feasts, we see that Christ involves Himself in this sordid affair not simply to bring justice, which would destroy us; but rather, in his great mercy, He enters into the story to “renew Adam” and, with him, all of us!

In the feast of Nativity, the timeless One enters human time. He takes on our flesh. He enters our human story. He joins himself to our narrative that we might, once again, be renewed as we join ourselves to His narrative. As He inscribes Himself into our sad story, we are given the opportunity to inscribe ourselves into His. The Lord enters into our life that we might enter into His Death and, by His Death, into New Life.

In the feast of the Theophany, the Lord enters the muddy waters of the Jordan. He could have crossed over the Jordan. He could have dried it up. And yet our Lord enters it and even permits another to immerse Him in the flow of the waters. If, in the Feast of the Nativity, Christ entered the human story, so now he enters into the flow of the cosmos. He restores not only Adam, but He recreates the cosmos as it was in the beginning.

Indeed, He is the Alpha and the Omega; the beginning and the end. And He is making all things new: our narratives, our lives, and the universe itself! This is the Gospel of renewal we celebrate on these twin feasts of Nativity and Theophany.