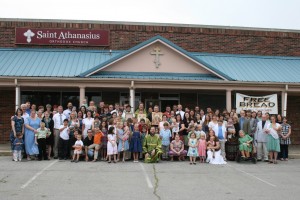 St. Athanasius was formally established as a mission of the Orthodox Church in America on the Feast of the Meeting of the Lord (February 2), 2002. The history of our community, however, extends beyond this “official” and canonical beginning. When the 25 founding members (including men, women, and children) formed St. Athanasius in February 2002, they came not only as new members of a new mission, but also as newly-minted Orthodox Christians.

Their broader journey into the Orthodox Christian Faith began in the 1990’s with the personal journey of David and Rozanne Rucker. The Ruckers—formed in the Wesleyan tradition—had been posted to Hong Kong as Protestant missionaries. While there, they had come to realize the limitations of their Protestant heritage in conveying the Gospel to people not steeped in Western culture. The Ruckers’ struggle to preach the Gospel in ways that would “translate” into the cultural idiom of the Chinese people led the missionaries to explore ancient forms of Christianity, including Orthodoxy.

Through their explorations of “things Orthodox,” the Ruckers discovered Holy Trinity Cathedral in Indianapolis, a community of the Evangelical Orthodox Church (EOC).  The EOC was founded in the late 1970’s by Protestant Evangelicals who were trying to “re-create” the early church. The EOC borrowed many forms from the Eastern Orthodox Church, while retaining a Protestant character.

In 1996, David and Rozanne Rucker formed a mission parish of the EOC in Nicholasville. As their journey continued, the members of the mission increasingly felt the spiritual call to become fully and authentically Orthodox. After years of discernment, the mission in Nicholasville decided to seek entry into the Orthodox Church of America (OCA.) And so it was that the faithful of Christ the Life-Giver EOC mission became the nucleus of St. Athanasius Orthodox Church in February 2002. Several months later, David Rucker was ordained to the Holy Priesthood in Dallas at the hands of the ever-memorable Archbishop Dmitri, founding hierarch of the Diocese of the South and the first bishop having care for St. Athanasius Orthodox Church.

One of the major challenges the parish faced in its first decade of existence was the need to get out of its storefront space and into a proper church building and campus. In 2011, St. Athanasius launched a capital campaign to help meet this need.  The capital campaign and property search were both successful. After a year of construction, in July 2014, the St. Athanasius community took up residence in its own free-standing church located at 100 Lime Lane. Today, the parish community enjoys a dedicated worship space (with proper altar, nave, and narthex), a large parish hall, classrooms, and offices for use in parish administration. Since moving into our new church, St. Athanasius has seen steady growth—not only by bringing in converts to our Orthodox Faith, but also by welcoming home scores of “cradle Orthodox” from Eastern Europe, Africa, and elsewhere into our parish community. At present, we have over 25 families (of more than 80 total) with one or more immigrants in their household. These people have greatly enriched the life of the parish, even as English remains our common tongue.

In February 2015, in conjunction with the celebration of St. Athanasius’ 13th Anniversary, Archbishop Nikon (Liolin), locum tenens of the diocese, and Archbishop Mark (Maymon) led the Dedication of the new church. In addition, Archbishop Nikon ordained Deacon Simeon Siskar to serve the growing community of St. Athanasius. On Pentecost of 2016, the parish welcomed our newly-elected Bishop (now Archbishop) Alexander (Golitzin) for his first archpastoral visit. Vladyka Alexander continues to be a frequent and welcome presence in our community.

In fall of 2017, St. Athanasius was one of 14 Orthodox parishes selected nationwide as a pilot parish for the Telos Project, a Lily-Endowment-funded initiative supporting work among 23-29 year-olds. Over the course of four years (2017-2020,) St. Athanasius is receiving $25,000 for work among young adults—and is using the Telos Project as a springboard for reflection about our ministries as we transition from the “pastoral model” of leadership to one that utilizes more lay leaders in ministry.

Even with our growth and development over the past 15 years, St. Athanasius continues to be guided by five core commitments:

The faithful of St. Athanasius take seriously the call to bear witness to Christ in an Orthodox manner. We encourage anyone living in the Bluegrass and beyond who might be interested in learning more about Orthodox Christianity to contact us.  We are here for only two reasons—to grow in Christ ourselves and, in serving others, to share this precious gift of our Faith with all those whom the Lord brings to us.