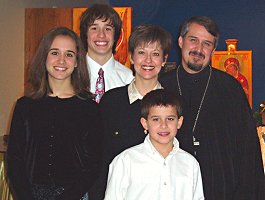 Father David was born in Danville, Kentucky, the third generation son of Methodist ministers in the Bluegrass State. He attended Asbury College in Wilmore, Kentucky where he received a Bachelor of Arts in Christian Ministries and Education. While attending college he participated as a summer volunteer missionary in Colombia, South America. There he met Rozanne, the daughter of missionaries to Brazil. A year after returning from Colombia, Fr. David and Rozanne were married, and after serving for a year as an associate pastor in the Methodist Church, they entered into career missionary service with an interdenominational Protestant mission organization which specialized in providing theological education around the world. Their thirteen years of missionary service with this board would take them to Japan, Hong Kong and China. During that time Fr. David also completed a Masters of Divinity degree from Asbury Theological Seminary (1986-1989), as well as three years of doctoral work in Missiology (ABD). As part of their work in Hong Kong, Fr. David and Rozanne attended Chinese University where they studied Chinese language (Cantonese), culture and history. Fr. David also served in mission administration in the personnel department of their organization, giving time to missionary recruitment, public speaking and public relations. Their thirteen years of missionary service included travel to South America, (Colombia, Brazil, and Ecuador), Central America, the Caribbean (Haiti, Panama), and Asia (Japan, Hong Kong, China, South Korea, Taiwan, and the Philippines).

It was while serving in Hong Kong and China that the Ruckers began to learn about the Orthodox Church. Fr. David was involved in theological education of Chinese church leaders in preparation for Hong Kong to return to China in 1997. In Father’s own words, “They were asking questions we never asked as Protestants, and I was not satisfied with my answers.” Fr. David turned to the Orthodox Church in an effort to help the Chinese make the Gospel of Jesus Christ truly “good news.” What began as academic research ended up leading them into life-giving relationships with men and women in the Orthodox Church. “I discovered a gold-mine largely untapped for the Chinese people. To our surprise, the Orthodox Church not only made the Gospel truly ‘good news’ for the Chinese—it transformed it into ‘good news’ for us. We discovered a fullness historically and theologically, and a community where we could begin to live what we truly believed. We found the Church.”

The Ruckers returned to Kentucky from Hong Kong in 1993. Fr. David began doctoral studies at Asbury Theological Seminary and Rozanne finished a master’s degree in Marriage and Family Therapy at the University of Kentucky. They were Chrismated in the Evangelical Orthodox Church in 1996 and began to plant a mission parish. Archbishop Dmitri received that entire mission by confession and Chrismation into the Orthodox Church in America, through the Diocese of the South in February 2002. Following further mentoring and training, Fr. David was ordained to the Diaconate and Priesthood in June of that same year. The Ruckers continued serving the parish they helped to found, St. Athanasius Church, in Nicholasville, Kentucky until December 2006, when Fr. David was called to serve the Orthodox Christian Mission Center (OCMC).

Rozanne is a licensed therapist. Fr. David is also a member of the Department of Evangelism for the Orthodox Church in America and has served on the Board of Directors of OCMC. They have three children, Lauren, Ethan and Andrew. Father’s hobbies include scuba diving, tennis, fishing and hiking.